How about Amanda Gorman in her bright yellow coat reciting “The Hill We Climb” at President Biden’s Inauguration? She made me rise to my feet in hope and ovation. Wasn’t she fantastic? 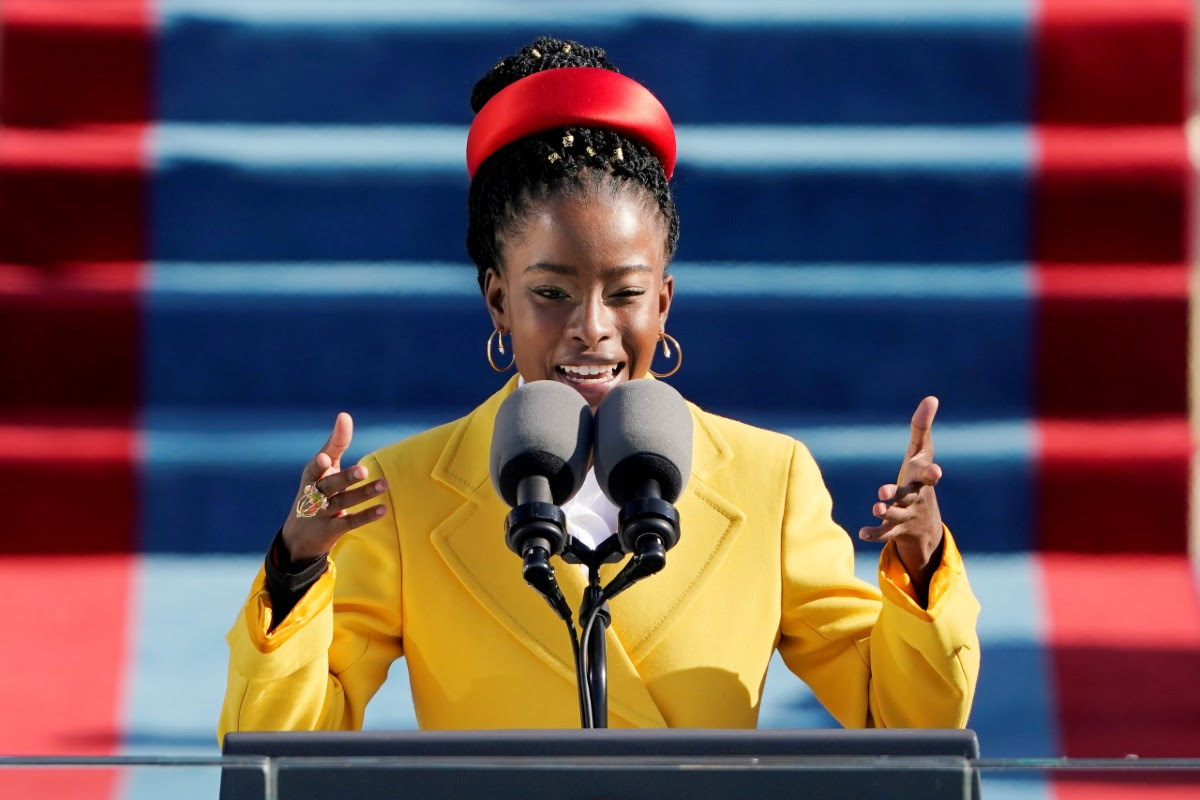 I’m biased, of course. I’ve been following her for a while now because my brilliant friend Katherine told me to, and because poetry is my love language. Plus, on Inauguration Day, Gorman used the words brave AND fierce and breathed joy into a moment where we held our breath in anticipation of something terrible to come.

Thank goodness so little happened during the Inauguration that the most exciting thing people talked about afterwards was the fashion: Ella’s wool coat and Bernie’s mittens! 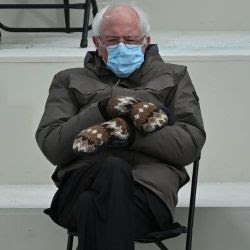 But can we talk a bit more about Amanda’s poem?

Her poem didn’t just talk about unity, it made us feel united. Was I the only one who wanted to turn to the people next to me and give them a kiss? Good poems do that; they kindle a feeling of intimacy between us.

We are used to poems during big moments like weddings and funerals (why do we save poetry for the dead? Why not include poetry daily, while we are alive?), but rarely does the poetry become the moment.

Amanda Gorman’s spoken-word performance upstaged the swearing-in ceremonies. Hers was a poem we could enjoy not just for the words on a page, but for the experience. It felt more like a shared song and less like a text we toil over at our high school desks. She delivered her poem to us like a gift, a much-needed balm of healing and hope.

“We will not march back to what was, but move to what shall be: a country that is bruised but whole, benevolent but bold, fierce and free.”

Gorman filled her poem with delightful sounds that rise and rhyme. She didn’t shy away from the tension, either. When rioters stormed the Capitol building on January 6th, Gorman had not yet finished her poem. She included the pain in the middle, so the event that nearly broke us becomes a hinge for hope.

“We’ve seen a force that would shatter our nation, rather than share it…But while democracy can be periodically delayed, it can never be permanently defeated.” 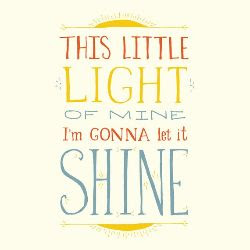 It was a hymn that reclaimed bravery and hope and made them contemporary, not old-fashioned virtues.

“If we’re to live up to our own time, then victory won’t lie in the blade, but in all the bridges we’ve made…if only we dare.”

Gorman reminds us that leadership comes in all sizes, colors, and ages. It especially comes from someone who steps into her identity and takes her place in her lineage, “where a skinny Black girl descended from slaves and raised by a single mother can dream of becoming president…” Yes! Finally!

When she was interviewed after the ceremony by Anderson Cooper, he referred to a tweet from Hillary Clinton who gushed about Gorman running for President in 2036. Cooper said, “President Gorman; it has a nice ring to it, doesn’t it?”

Gorman responded with a smile, “Yes, it does. Madame President Gorman. I like the sound of that.” Most of us would have dismissed the praise and the possibility. Instead, it was refreshing to see Gorman confidently stand in her power. 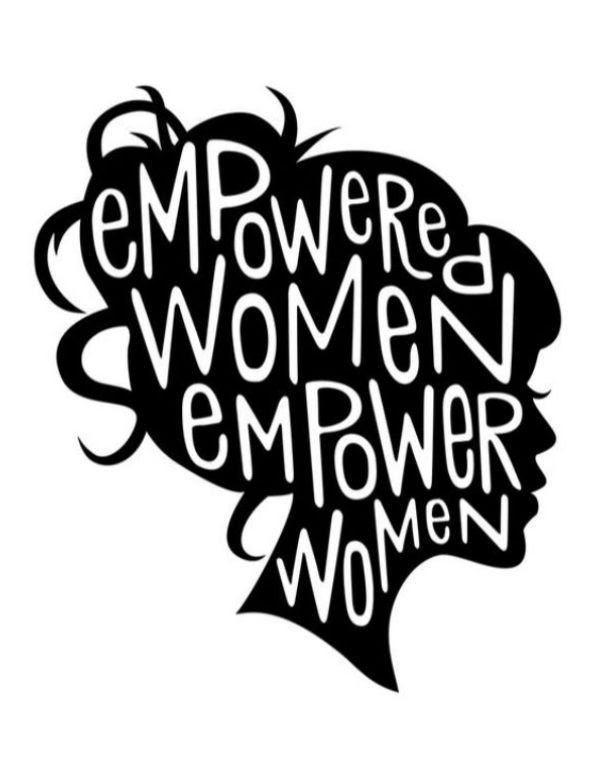 We are socialized to diminish praise and accolades. Won’t we become too arrogant, too mainstream, too full of ourselves, and therefore unlikeable?But Gorman is less full of herself than she is full of those who came before her. She honors the slaves and the black writers whose voices fought to be heard. She steps into her power without shrinking from it. She recited for Cooper the mantra that she says to herself before she performs:

“I am the daughter of black writers. We are descended from freedom fighters who broke their chains and changed the world. They call me.”

The power of her mantra left Anderson Cooper speechless. (Watch the interview.) The moment reminded me of the words of another poet, @nayyirah.waheed, who writes:

In seeing ourselves belonging to something larger than us, we offer our small part with bold conviction, rather than shy away from offering anything at all.

“It’s the past we step into and how we repair it.”

My mantra before a big talk is borrowed from Barbara Streisand who revealed to James Corden that she says simply, “Let go, Let God.” Now, I’m inspired by Amanda Gorman to add words to my mantra that honor the line of strong women who came before me. I’m not alone.

My voice comes from all those who broke barriers to give me the freedom to speak and all those who lift me now and keep me from breaking apart. Isn’t it humble to use my voice, rather than silence it? 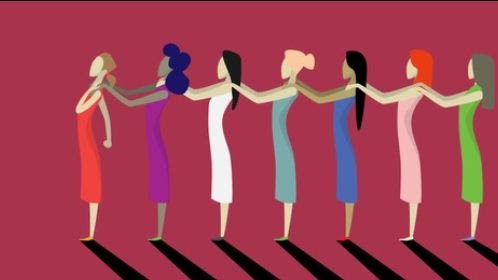 Bravery and humility are sisters. Together they help us to step into our power. We are a small piece of a great whole and therefore we need to demand courage from ourselves to contribute our part boldly, imperfectly, and often. It’s not self-centered; it’s us-centered. We just need to find light and be a part of making it.

When we do contribute, it’s easier in these times to join the chorus of critics and trash others. It’s harder to demand hope from ourselves and to seek the light in the shade. Amanda Gorman takes it one step further and challenges us not just to look for the light, but to become it.
“For there is always light, if only we’re brave enough to see it. If only we’re brave enough to be it.”

P.S. More poet-light-makers worth discovering are Jenny Zhang, Anne Boyer, and M. Nourbese Philip. Thanks to my niece Celia for introducing them to me! And in 2020, Brandon Leake became the first spoken word poet to be on America’s Got Talent. He also went on to win it. Yay! Poetry!
***
image credits: Patrick Semansky-Pool/Getty Images, @kasiturpin